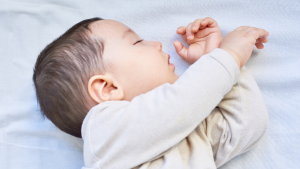 I am always being asked about short naps. This question is complicated by many popular mainstream sleep programs giving prescriptive and inflexible timings and peddling non-evidence-based information that ends up scaring parents. The usual story is that parents have become convinced that their child’s short naps are harming their development and that short naps are non-restorative.

Well, this has rattled my cage one too many times so let me break this down.

It’s important to say that there is actually very little research on nap lengths in children, which has presumably led to so much anecdotal and experiential rules being proposed. While there is research pointing the general benefit of naps, and the total sleep time in 24 hours, there is hardly any data on daytime sleep length, frequency, spacing or pattern. One of the outcomes of this is that everyone has a different definition of what a short nap actually means. This seems to be fraught with personal opinion and made-up numbers.

We have some general ideas about napping. For example, it was found in a systematic review that most little ones are down to one nap by about 15-18 months, that night waking remains common in the first 2-3 years of life, Asian children have the shortest total sleep times, and sleep gradually consolidates over time (Galland et al, 2012). Another more recent study found that night waking and sleep patterns were variable for at least the first 2 years, and provided data on total sleep times (Paavonen et al, 2020). More recently still, another study found that the broad timing of naps may influence memory and performance of older children. A study by Mason et al (2021) found that skipping a morning nap and having an unrestricted afternoon nap did not support memory as well as having both a morning and afternoon nap, but did not specify the gap between nap opportunities, which adds to the weight of my assertion that there is no evidence for specific ‘wake windows’, and rather, an individual, child-led approach to observing tired cues is preferable.

In terms of the length of a sleep cycle, many people suggest that a child has to have a nap duration of a particular length in order to ensure that the sleep is restorative. There are also many misunderstandings about the length of the sleep cycle, such as the myth that sleep cycles are different lengths according to the time of day (they’re not), and that sleep cycles are longer than they really are. Large studies find that the sleep cycle of a child aged 0-3 is approximately 50-60 minutes, and the mature sleep cycle of around 90-120 minutes occurs in children at some point between 3-5 years. It then remains stable (Davis et al, 2004). But there are many reasons why sleep duration may be much less than 50 minutes, and it is categorically not true that a nap must be 50-60 minutes to be restorative. Nor is it true that we can assume deep sleep has occurred if the nap was 50-60 minutes. It’s more nuanced than that…

One of the hypothesized problems of short naps by mainstream sleep trainers is that a short nap means that infants won’t achieve deep sleep. Not only is this a flawed concept because of the above, but it assumes that deep sleep is the most important stage of sleep for development.

Freidrich et al (2017) measured memory consolidation related to learning words in infants aged 6-8 months. They found that short sleep duration was associated with negative memory affects. Hold up. What did short sleep duration mean? Less than 9.5 minutes spent in NREM2 sleep. Yep. You read that right. The study found that the length of sleep is relevant, but it is specifically NREM2 sleep during which sleep spindles occur that seem related to memory organization and language acquisition. NREM2, for the uninitiated is a stage of light sleep. So positive memory changes are taking place in light sleep, not deep sleep. The study found that infants do experience sleep spindles in NREM3 (deep sleep) as well, but these were not correlated with improvements in memory.

One of the phrases I use a lot with parents is ‘all sleep is good sleep’. While there are limited studies exploring this in infants, we do have a reasonable amount of literature in adults. Since many biological aspects of sleep will cross over between infants with a mature circadian rhythm and adults, we can cautiously make some recommendations and provide assurance about sleep based on some adult studies. One study looked at the impact of napping on air traffic controllers’ concentration and alertness on night shifts (Signal et al 2009). This study found that very little NREM3 (deep sleep) was recorded, despite the length of the nap being between 35-50 minutes. They also recorded very little REM sleep, yet the naps were found to decrease subjective sleepiness and improve reaction times.

It’s also an interesting study because it is often assumed that if a child has been asleep for a certain length of time, the longer length is evidence in and of itself that deep sleep has occurred. This is simply not true. The brain micromanages sleep staging, and we do not robotically cycle through stage 1, stage 2, stage 3 and REM in a consistently predictable fashion. The amount of sleep pressure driven by the amount of time awake prior to the sleep opportunity influences nap length and staging.

In another study (McDevitt et al, 2012), it was found that the number of naps taken (again by adults) in the day influenced the length and sleep stage achieved during the nap. This study also explored reasons why people nap and found that there is a split between people who tend to nap more frequently and those who never nap. They suggested that this is likely because of differences in sleep need, and those who feel sleepier in the day manage this with more naps. While this may sound like a contender for obvious comment of the year, what we should remember is that just like us, babies and young children have different napping and overall sleep needs.

So… go forth and be reassured that those babies napping for 20, 30, 40 minutes only are doing just fine. If they seem happy and are developing as we would expect, let it go. There’s only so much sleep we can actually achieve in 24 hours my friends.

If you need more support with sleep, then check out my 0-18 month sleep guide, my Sleep Transitions Guide, and my Responsive Support Class.

Lyndsey Hookway is a paediatric nurse, health visitor, IBCLC, holistic sleep coach, PhD researcher, international speaker and author of 3 books. Lyndsey is also the Co-founder and Clinical Director of the Holistic Sleep Coaching Program, co-founder of the Thought Rebellion, and founder of the Breastfeeding the Brave project. Check Lyndsey’s speaker bio and talk brochure, as well as book her to speak at your event by visiting this page. All Lyndsey’s books, digital guides, courses and webinars can be purchased here, and you can also sign up for her free monthly newsletter here.